Another season is upon us, and that means it’s time for our latest limited-edition seasonal launch. Nothing says autumn/winter quite like a dark beer, so join us in getting settled by the fire with a bottle of our limited-edition London Porter.

With this beer, we’re celebrating our roots as a proud London brewery. What better way than to pay homage to a beer style born and bred in the capital; the London Porter. Of course, being the UK’s only alcohol-free brewery, this beer is akin to a classic porter in everything but the ABV, coming in at just 0.5% ABV.

In 18th century London, beers were traditionally aged at the pub; breweries would carry out a primary fermentation before shipping it out to be served straight away or aged in pub cellars. But the porter was born from pioneering breweries who decided to experiment with aging their beer in-house, keeping the beer in traditional porter tuns to ferment and eventually mellow, becoming sweeter than the stouts of the day. Those same breweries introduced other advances in brewing, such as the use of thermometers. We’re tipping our cap to those early beer pioneers who taught us about changing the game in beer.

So what about the Nirvana Brewery version? Pouring a rich dark brown, roasted malts take centre stage, bringing notes of caramel, coffee and just a touch of chocolate. We kettle brewed with a light sprinkling of the classic British hop variety Fuggles, enhancing the notes of spice and oak. Warming, complex and indulgent, this beer is one to savour with your feet up. Pair with hearty British Food for maximum enjoyment. Available for a limited time on our webshop with free shipping over £35. 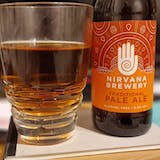